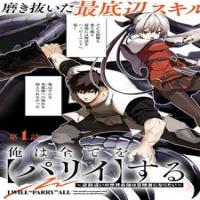 I Will "Parry" All: The World's Strongest Man Wanna Be an Adventurer ; I Will Parry Everything to Become the Greatest Adventurer! ; Ore wa Subete o “Parry” Suru: Gyaku Kanchigai no Sekai Saikyou wa Boukensha ni Naritai ; 俺は全てを【パリイ】する ; 俺は全てを【パリイ】する ～逆勘違いの世界最強は冒険者になりたい～

This is the tale of a man who had mastered how to “parry.”

At the age of 12, a young boy named Noru had decided to train himself in the mountains after being rejected by the capital’s official training centers for being “talentless.” He believed that, with enough hard work and effort, he could one day become like the protagonists that populate his childhood stories. Full of determination, he would practice every day with his makeshift wooden sword, endlessly repeating the only sword technique he knew—“parry.” The hours turned into days, the days turned into months, and the months turned into years. Eventually, he had trained this one skill to such an extreme that he could snap a thousand branches with it. However, no matter how hard he tried, he couldn’t get the desired result, he couldn’t learn any new skills required to become a real adventurer. It may be time to let go of his dream. But he couldn’t. Not just yet. Knowing this, he returned to the capital again.

This was a man of endless dedication, a man who used that dedication to become one of the strongest in the world. The only problem is, he didn’t know it yet.

The Baby Land Lord Is Retiring

A Way To Protect The Lovable You

The Brocaded Tale Of The Girl Si