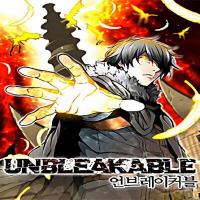 Unbreakable is a Manga/Manhwa/Manhua in (English/Raw) language, Manhwa series is written by Updating This Comic is About
The laws of the world have changed!
In an instant, the world turned into a hell for the strong because of the god Kashita.
At the end of the slaughter test given by the gods, “Yoo Dohyuk” became the “Great Emperor”, the strongest of mankind, and defeated God.
However, the pleasure of victory is short-lived, and everyone returns to the first day of the trial with their memories of what happened.
With the exception of “Yoo Dohyuk.”
Instead of helping each other, people rush to take the place of the strongest one by killing the “Great Emperor”.
In a world crazier than his previous life, can Yoo Dohyuk kill God and restore peace?

Senken no Majutsushi to Yobareta Kenshi

The Game That I Came From