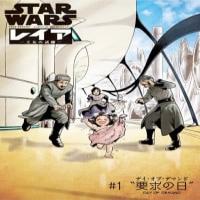 From Disney–Lucasfilm Press:
“It is Leia Organa’s sixteenth birthday and she participates in the traditional ceremony where she declares her intention to one day take the throne of Alderaan. But she’s much more concerned about the way her parents are acting lately: lots of meetings and late dinners and not talking to her as much as they used to. Eventually, she discovers the reason for their secrecy: their involvement in the increasingly organized rebellion. When Leia decides to become involved herself in the fight against the Empire, whether her parents approve or not, she will have to prove to them that she is a valuable asset who must be allowed to take a stand, regardless of the risk to herself. Her stand will also put her at odds with a pacifist young Alderaanian man who gives Leia her first kiss…and her first real loss.”

Based on the young adult novel Leia, Princess of Alderaan.

In This Life, I Will Raise You Well, Your Majesty!