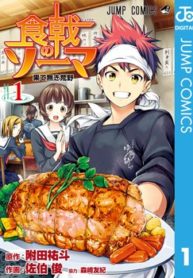 is a Japanese shonen manga means its a Manga or anime aimed at young male audience. Shokugeki no Soma Manga is written by Yuto Tsukuda, in its name, ‘Shokugeki’ refers to a cooking battle where disputes are settled by cooking competitions. And ‘Soma’ is the name of lead character.
Coming to plot of Shokugeki no Soma , it tells us a story of a boy Soma Yukihira. This boy in Shokugeki no Soma dreams of becoming a full-time chef in his father’s neighbourhood restaurant. His father has taught him his own cooking style called ‘Yukihira Style’.

He dreams of beating his father in Sholugeki or cooking battle. But he has lost to his father 489 times. Just before Soma starts his high school, his father decides to go abroad on job closing his restaurant. He also enrolls Soma into ‘Totsuki Culinary Academy’ a cooking academy to learn cooking. It is a prestigious academy where Soma is one among 92nd generation students. Less than 10% of people graduate out from the academy and rest all fail. Now this is where the story of whole Shokugeki no Soma Manga revolves around.
The director of the Academy himself introduces Soma into the academy because he liked his dish at the entrance exam at the first bite and the only one to pass the exam.

Also soma introduces himself and overconfidently brags himself in the whole class. has real world cooking techniques from around the globe and all are real dishes with a flavour of comedy and drama in the anime. It has a very good imagery to demonstrate the flavors and eater’s experience.

Vengeance Of The Reawakened Sword God

Jewel of The Sea

The S-Classes That I Raised

I Am Being Chased To Fall In Love Everyday

The Story Of Thorny Spear