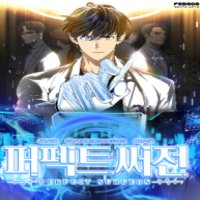 When he was a child, his father was said to have died from a car accident.

But what actually caused his death was ‘Medical Negligence’.

Ever since that, his dream was to become a ‘Perfect Doctor’ that would never deny or mistreat a patient.
However, reality was harsh. His mother was inflicted with an incurable disease

which required a lot of money. He quit his university hospital internship and became a sell-out dermatologist.
While he had stopped in his tracks due to the harshness of reality, a state-of-the-art Artificial Intelligence, ‘A.I. – Ronnie’, came to him. And thus, his journey to become a perfect doctor started once again.

Give A Heart To The Emperor

I Gave Birth to the Tyrant’s Child

The Second Male Lead is Actually a Girl

Even If You Don’t Do It