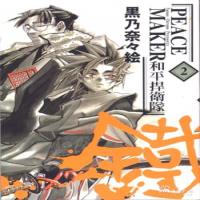 With Japan in the midst of a bloody revolution, an elite cadre of samurai swordsmen known as the Shinsengumi must protect the embattled city of Kyoto. Tetsunosuke Ichimura has spent his life dreaming of working at the Shinsengumi, and his wish has recently been fulfilled. As a page for Vice-Commander Hijikata Toshizo, he is privy to a wealth of secrets and is among Japan’s highest ranking officials, some of whom are actual historical figures. When a strange gun-toting swordsman, Ryoma Sakamoto, recognizes Tetsunosuke and his brother as the sons of someone he calls the “Peacemaker,” trouble brews and the other Shinsengumi run the outsider out of town.

Full of action, this sword-fighting and gun-toting story is centered on the bakumatsu, a chaotic and bloody time of revolution that would ultimately result in the disbanding of the samurai and the opening up and Westernization of Japan. Fifteen-year-old Tetsu must witness the war around him, and perhaps gain some amount of wisdom about the samurai.