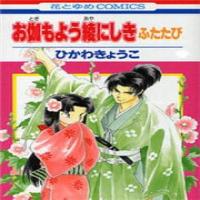 N/A, it has 5 monthly views

The sequel takes place a few months after the end of the first series. Shinkurou and Suzu have gotten married and settled down as vassals in the employ of the governing family of Ima. Just when they’ve gotten used to the rhythm of their new, peaceful life, orders come from an influential government official that Shinkurou and Suzu must travel to the capital to meet with him. Along the way, they are beset by robbers and demons, and find they are being followed by a mysterious mononoke in the shape of a little boy?! The two must reunite with old friends, and make some new ones, in order to do battle with the supernatural forces that continue to plague them!

The Human-Hating Demon Lord Has No Mercy For Little Girls

The Time of the Terminally Ill Extra

Return Of The Avenger

Falling For My Neighbor

Despite Coming From the Abyss, I Will Save Humanity

The Evil Empress Loves Me So Much

Boss Is Super Strong, But A Coward