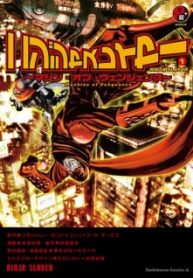 Ninja…Ninja were… merciless demi-gods, ruling Japan with their karate in the age of ninja tranquility. But, “some” committed a forbidden form of harakiri storing their souls at Kinkaku Temple for future resurrection. Their lost history was falsified and concealed and the truth about these ninja was long forgotten.Now, in the future where the universalization of cybernetic technology and electronic networks are God, suddenly, sinister ninja souls, resurrected from thousands of years past are unleashed on the dark shadows of Neo-Saitama. Fujikido Kenji, is a salaryman whose wife and child were killed in a ninja turf war. In a brush with his own death, Fujikido is possessed by an enigmatic ninja soul.Fujikido cheats death and becomes Ninja Slayera Grim Reaper destined to kill evil ninja, committed to a personal war of vengeance.Set in the dystopian underworld of Neo-Saitama, Ninja Slayer takes on Soukai Syndicate ninjas in mortal combat.

i Will Live Freely in Another World With Equipment Manufacturing Cheat