Handling the demoness and the saintess 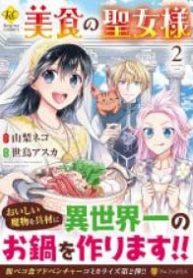 Handling the demoness and the saintess Average 2.5 / 5 out of 6

Handling the demoness and the saintess

“After remarrying, Dad and his beautiful stepmother embarked on a honeymoon abroad, leaving Aunt Qian He, who coincidentally shared the same birth year with San Qiu, to move in. Expecting the start of an unabashed life at first, it never occurred to San Qiu that his aunt was a Demon-slaying Celestial Being. San Qiu himself, much coveted among Demons alike, found himself a constant target by Demons… Not to mention his long-lost childhood friend, Xiao You turned out to be the greatest assassin of the Banished Celestial Agency, an organisation managed by Celestial Beings. Xiao You simply could not stand the sight of Qian He, who came between her and the love of her life… “

The Weakest Occupation “Blacksmith,” but It’s Actually the Strongest

Ascendance of a Bookworm Part 3