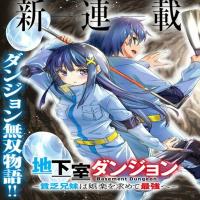 Basement Dungeon: Poor Brother and Sister Become the Strongest in Search of Entertainment

Chikashitsu Dungeon: Binbou Kyoudai wa Goraku wo Motomete Saikyou e is a Manga/Manhwa/Manhua in (English/Raw) language, MONSTERS
series is written by Sabi Spoon This Comic is About
Countless dungeons that suddenly appeared all over the world. And the mysterious creatures that live there.
The government of each country were making every effort to investigate and manage “dungeons”.
Meanwhile, a new dungeon suddenly appeared in the basement of the Boro family where Touka and Haruka, brother and sister living in poverty!
They begin to explore this dungeon on their own, looking for treasures and meat that monsters will drop …
(Google Translate)

King of the Labyrinth