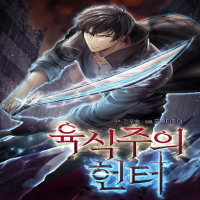 With beasts appearing all over the world, billions of people have died to the catastrophic event. Part of the survivors who lived became “metahumans”. They were people who would be able to face off against the beasts, as such, a huge gap between metahumans and the humans who weren’t able to transition opened. Kim Seonwoo is a regular human guide for the metahumans’ beast subjugation. On the verge of their death, he heard a voice in his head say: “Kill them.” “Kill them and take their power!”

Pendant of the Nymph