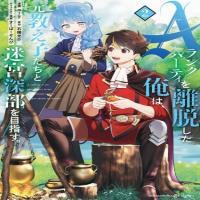 A party of the protagonist who is a skilled supporter x newbieA-Rank Party wo Ridatsu shita Ore wa, Moto Oshiego-tachi to Meikyuu Shinbu wo Mezasu.Aランクパーティを離脱した俺は、元教え子たちと迷宮深部を目指す。

“I can’t do this!”
Yoke Feldio, A Red Mage, has left his A-rank party of five years to become an adventurer, and has finally run out of patience with his life as an adventurer, being ridiculed as a “Handyman” and “poor dexterity”!
And so begins a desperate life of joblessness….
HOWEVER! Soon after Yoke is welcomed into a party of former students, all of whom are girls! And as he conquers dungeons, Yoke’s abilities are revealed one after another.
In fact, the magic and skills that he wields have a power that is beyond the norm–?
[Taken from mangamiso.net]

Blade Of Wind And Thunder