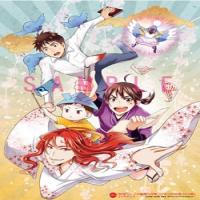 Inaba Yuushi’s parents passed away when he was in his first year of middle school, forcing him to move in with relatives. Though they did care for him, he could tell he was being a burden. After graduation he was all set to move to a high school with a dormitory, but said dorms suddenly burn down! It’s tough finding lodgings as an orphaned student with little money, but Yuushi somehow manages to acquire a room in a nice old building close to the train station.

Of course there’s a catch: the place is a “youkai apartment,” where humans and supernatural creatures – ghosts, mononoke, oni and the like – live next door to each other. A friendly high school sophomore named Akine lives there as well, but not only is she completely unfazed by the monsters, she can even exorcise evil spirits! Looks like Yuushi’s new life is going to be much stranger than he bargained for…

I Have a House in the Yellow Springs

What Do You Do When You Suddenly Become an Immortal?