The Saga of Lioncourt 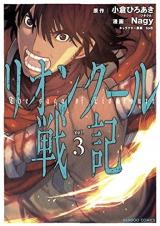 Tadashi Tanaka is a typical office worker whose life comes to an abrupt end at the age of forty-one due to cancer. But instead of going to heaven, he finds himself in a world resembling medieval Europe. Much like the Middle Ages, there are no modern conveniences, people eat with their hands, and pigs roam free in the streets. Worst of all, wars between nations are an everyday occurrence.

Now, Tadashi Tanaka must live his second life as Varian de Lioncourt. Can an ordinary office worker survive in this cruel world?