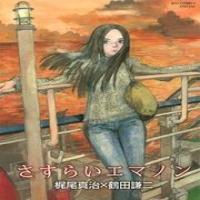 From Kotonoha:
Based on the award-winning novel by Shinji Kajio, Memories of Emanon tells the story of a mysterious girl who holds a 3-billion-year old memory, dating back to the moment life first appeared on Earth.
The first half of the volume is the colored Wandering Emanon ’67 chapters (published before as Emanon Episode: 1). The second half is Wandering Emanon set before the ’67 chapters.

Legend Of The Northern Blade

The Tale of the Outcasts