Preference for the Possessor 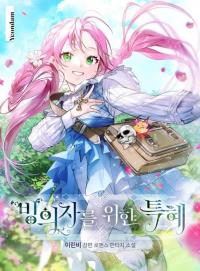 Preference for the Possessor Average 5 / 5 out of 7

※ Be prepared for a world after death!

I received a strange spam text message right before I died. I thought I was dead but when I opened my eyes I was at the transmigrated examination bureau.

There really is a world after death?
I’ll transmigrate to a book?!

“Do you have a particular genre you like?”
I, who mastered a variety of genres in my previous life, In my next life, I hoped for a child-rearing novel where I can become a cute, dainty girl and acquire infinite love.

Survival Difficulty S-class, an book full of regression instances <Regressing until the World is Saved>.

ㅡ And the character I will possess thereㅡ

is the daughter of a servant who serves the ruthless aristocrat familyㅡwho abused the main character?!

However, thanks to <The Life Insurance Full Package>, which I signed up for just before I died, I got special privileges…

This is a story about surviving an S-class survival difficulty book with the help of new skills, insurance privileges, and God’s favoritism and affection that I’ve gained!

The Lady Locksmith of Mengliang

Second Life of a Trash Princess

I Am A God Of Medicine