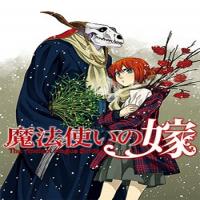 With her mother dead and father long gone, Chise Hatori has spent her childhood being passed unwanted from relative to relative, until she finally makes her unfortunate way to a strange and improbable auction block. Offered as a “sleigh beggy” to the highest bidder, Chise is purchased by the (literally) boneheaded Elias Ainsworth, who promises to take her on as his apprentice. Elias is a mage, and his world is one of dragons and faeries – but before Chise can begin to get accustomed to all that nonsense, Elias drops another bombshell. Apparently Chise isn’t just intended to be his apprentice – she will also be his bride..

On a Quest to Find a Husband in Another World