Leveling With The Gods 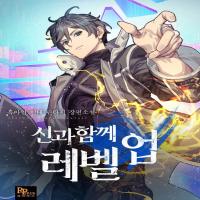 Leveling With The Gods is a Manga/Manhwa/Manhua in (English/Raw) language, Manhwa series is written by Black Ajin (흑아인) [Original Story], Story By Oh Hyun This Comic is About
Gods from another world, the Outer Gods.
《Despair that Reaches the Skies》, 《Gloom Trapped in a Swamp》, 《One Who Couldn’t Be Born》, 《Foolish Calamity》.
Normal people lost their lives simply by looking at them. Such beings were tearing the world apart… After years of fighting, the final survivors came to a conclusion.
“An Inner cannot beat an Outer.”
In that moment, Chronos, a divine being that could manipulate time, sacrificed himself and turned back the Clock Movement.
“There is no way to win. For now.”
“Return to an old world line. And start over.”
The person chosen by all the gods to return to the past, the last human to climb the Tower, yet the one who managed to fight with the gods to the end—Kim YuWon.
“An Inner can’t beat an Outer. Even if that’s the case…”
“I will still win in the end.”
Can he regather his comrades that fought with him until the end, and lead the fight against the Outer Gods to victory?

I’m the Only One Loved by the Constellations!