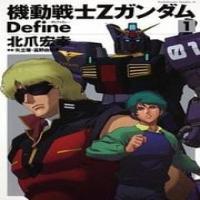 Ensign Reccoa Londe has provided the AEUG with information regarding possible mobile suit development at the civilian colonies of Green Noa. Lieutenant Quattro (Char Aznable) with his wingmen Lieutenant JGs Apolly (Andy) and Roberto (Ricardo) head to the colony to investigate. On Green Noa 1, Kamille Bidan is rushing to the spaceport where the Temptation, a ship a former One Year War ace is on, is docking. He’s hoping to get an autograph from the famed Captain Bright Noa. As Bright explains that he’s on duty, Jerid and company interrupt the two. Jerid smacktalks Bright for receiving a two rank demotion upon refusing to join the Titans and grabs Kamille’s photo saying he should sign it as an elite member of the Federation. The two get into a scuffle and Kamille is hauled off for questioning. Matosh questions Kamille about being an AEUG insider but just then he’s freed after his story checks out. Just as the handcuffs come off, the Gundam MK-II crashes into the building.

Yuukyuu no Gusha Asley no, Kenja no Susume