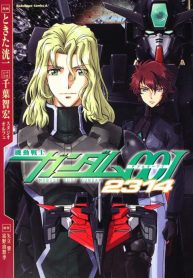 The story runs concurrent with Season 2 of Mobile Suit Gundam 00 and tells the story of a young man, named Leif Recitativo, who was ordered by Veda to gather a group of living bio-terminals called Innovades. Members of Celestial Being’s shadow group Fereshte (which is now disbanded and rejoined the main organization) reappears as a supporting cast to the main characters.

I Refuse to Be Executed a Second Time

Way To Be The Evil Emperor