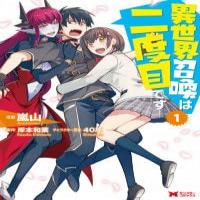 A Second Time for an Otherworld Summoning ; 異世界召喚は二度目です

There was once a man who was summoned to another world, and saved it. Of course, he became too popular there, and turned into an isekai-normie. However, that man fell into a “trap“, and was forcibly returned to his original world. Moreover, he had to start over as a baby!
This is the story of the way-too-fantastic ex-hero who lived as a gloomy high-schooler, as he gets summoned once again to that same other world in a very unexpected development!

The Bad Ending of an Otome

The Vampire Next Door

I Refuse to Be Executed a Second Time

A Sword’s Evolution Begins From Killing

With A Sword Domain, I Can Become The Sword Saint