Eight Princes Go to the Teppen 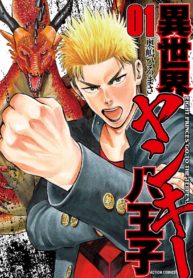 In a technological high school in the suburbs of Tokyo, Shinichi, and his cronies reign supreme after having defeated one after the other all the gangs in the region. But for the unbeatable Shinichi, victory is too easy. What to do now that he has reached his goal? Fighting is the only way he found to allay his frustration at having to take over the reins of the small family factory.

As he despairs while thinking of finding a thug worthy of him, he and his friends are suddenly transported into a fantasy world. His fists are no longer enough against the evil creature that appears in front of him. Never mind that, he’ll draw a chainsaw. For the villager he saved, there is no doubt that he and his friends are the princes of prophecy, destined to defeat the God of Evil.

Shinichi is in heaven. He finally has an opponent worthy of him.

Kyoukai Meikyuu to Ikai no Majutsushi

Your Talent is Mine