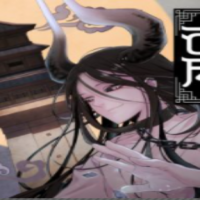 Throughout history, humans have been at war with the Fallen, demonic creatures who were banished to live in the Barrens for their sins. One day, the king of the Fallen, Azazel, is captured by the imperial hunters led by General Mu Ryang. But contrary to the general’s initial beliefs, Azazel isn’t the cold-hearted monster the legends have made him out to be. In fact, he shows compassion for his fellow Fallen who have been ruthlessly hunted down by the humans, and even offers himself up in exchange for his people’s safety. After this eye-opening encounter, Mu Ryang begins to question who the sinners really are, and Azazel plans to use the general’s changing perspective to turn him against the crown prince, Jeong Jin, and put an end to centuries’ worth of conflict.

“Asha”, the king of demons captured by humans. Asha, imprisoned in a prison tower, creates divisions between Crown Prince Jeongjin and General Muryang, and attempts to destroy them. A political battle, action, and unpredictable oriental fantasy unfolding against the backdrop of the imperial palace.